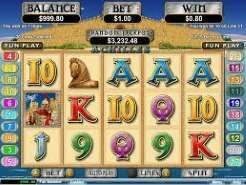 Play Now
Achilles slots takes players back to the Roman Empire and before with the very well known invisible warrior Achilles. He is considered somewhat an icon because of his strength, his only weakness being his heel and the love he had for Helen of Troy. This five reel twenty payline slots game touches on the life of Achilles, his battles and his love for Helen of Troy. Players can try out this game in the fun mode before placing real money bets of up to $100 per spin using a variety of different coin sizes. This game also includes a random progressive jackpot that can be won at any time when playing the real money version of the game.

Achilles is the wild symbol and he substitutes for any of the symbols on the screen, apart from the Troy scatter. On his own Achilles is also the highest paying symbol in the game, awarding players up to 10000 coins when five of the symbols land on an active payline. Four of the Achilles symbols awards the player 2500 coins, three awards the player 500 coins and two awards the player 25 coins. Three and more of the Achilles symbols on the screen triggers a bonus pick game. Players are invited to pick one of the Achilles symbols and this will reveal a bonus number of free spins. The player can win 15,20 or 25 free spins during which all winnings are tripled and all Troy symbols appearing change into Achilles or Helen. There is another free spins bonus game that is triggered when three and more of the scatter Troy symbols appear on the screen. Players are awarded 10 free spins during which all winnings are doubled and these free spins can be triggered again. The scatter on his own also rewards players with multiplying payouts of up to 500x when five appear on the screen, in addition to the free spins. And of course the random progressive jackpot can be won at any time when playing this ancient yet modern and rewarding slots game.
Play Now