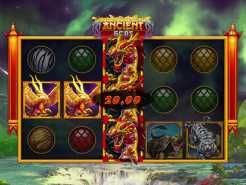 Play Now
The Ancient Gods are literally out of this world, especially when seeing their power and mysticism. This five reel twenty five payline slots game gives players another perspective of the ancient world of the gods and their dragons and mystical creatures and objects. Players can try out the game in fun format before placing real money bets and this gives them a chance to get to know the game. When ready to place real money bets, the most the player can place per bet is $25 but the rewards can be huge.

The dragon is the wild and it appears one each of the reels where it can substitute for other symbols and in this way complete winning payouts.On its own it is a very high paying symbol awarding players up to 2500 coins when five appear on the screen. The dragon when appearing can randomly jump to other reels turning further symbols wild and giving the player more payouts and higher payouts. The scatter is the infamous medallion of the ancient gods and this rewards players with multiplying payouts when three or more appear on the screen. Three reward the player with 2x the coin bet placed, four reward the player with 10x the coin bet placed and five reward players with 200x the coin bet placed. In addition three and more of the medallions reward the player with free spins. The player is awarded 2 free spins for every medallion or dragon that is on the screen. During the free spins all winnings are doubled, and the player may be lucky enough to trigger further free spins. This game is one of ancient gods and their tools and dragons and is a perfect way to enjoy slots if you are lover of mysticism.
Play Now