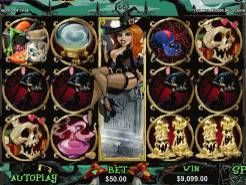 Play Now
Bubble Bubble slots is a fun and exciting slots game that has Winni the Witch as the main character in the game and lots of wizardry that keeps players on their toes and also involved in this great game that has five reels and fifty paylines. Players may try out the game in fun mode before placing real money bets. The maximum bet per spin is $12.50 and players can choose different coin sizes per spin. There is also an auto play for players that like to preset the number of spins the game runs for consecutively, at any point the auto play can be stopped, and the player continues with manually hitting the spin button.

Another bonus of playing this slots is the win win feature, this gives the player a guaranteed win if he has not triggered the bonus game within a certain number of spins. The player has a choice of three different bonus games triggered when three and more of the cauldron scatter symbols appear on the screen. The player is invited to choose one of the cauldrons that will award him one of the three bonus games. The player can win 9 free spins with in the great ghosts feature that also has ghosts flying across the screen turning other symbols wild or he can win the wild witches feature that awards the player 9 free spins and extra Winni wilds on the screen. Or the player may choose the bewitched feature that gives him 7 free spins and Winni appearing on two reels. Winni is the wild that appears on each reel in the base game where she can substitute for other symbols and complete winning payouts by doing so. When Winni is used in a payline, the winnings for that line are tripled. This is a game of spells and potions with lots of action and plenty of winning options with the extra Win Win feature guaranteeing a win for the player.
Play Now