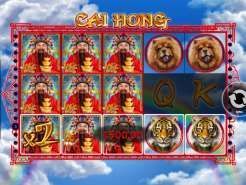 Play Now
Cai Hong Slots is a game centered around the Chinese Gold of Wealth. In this game that has five reels and thirty paylines, the God of Wealth is the main character who brings good tidings to ancient China. Players may try out this game in the fun mode before placing real money bets of up to $30 per spin using just one coin per payline. Players can also switch to auto play mode when placing real money bets, this gives the player the opportunity of presetting the number of spins the game runs for consecutively. At any point the player can switch to manually hitting the spin button.

The wild symbol in this game substitutes for other symbols in the game apart from the scatter and in this way can make up winning paylines. When the wild is used to make up a winning line, the winnings for that line are doubled. On its own the wild is a very high paying symbol awarding player sup to 10000 coins when five appear on an active payline, four reward the player with 2500 coins, three reward the player with 250 coins and two reward the player with 10 coins. The wild symbol is the important God of Wealth, the scatter symbol is a group of Chinese letters spelling out his name. The scatter awards players multiplying payouts and is also a trigger for free spins. Five of the scatters awards players 500x the coin bet placed, four awards the player 20x the coin bet placed and three awards the player 5x the coin bet placed. Initially players are awarded 5 free spins with a 2x multiplier when three and more of the scatters appear on screen and with this players are also rewarded with a pick feature that can award them further free spins and an increased multiplier. The player can win up to 33 free spins with a 15x multiplier when playing this traditional Chinese slots game.
Play Now