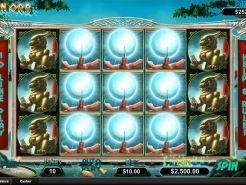 Play Now
Dragon orb takes players to the mystical world of dragons and temples. In this game the Dragon orb is sought after by the many idol worshipers as they work their way to the temple. This game has five reels and ten paylines. Players may try out the game for fun before placing real money bets of up to five coins per spin. There are is a fixed coin size of $0.10 and players can also set the game for continuous betting with the auto play. The game also includes two random progressive jackpots that can increase in size with every real money bet that is placed. Both the minor and major jackpots can be won at any time when playing this intense slots game.

The game does not include any special features apart from the expanding wild that also causes a re-spin when appearing on screen. The dragon orb is wild and it appears on reels 2, 3 and 4 where it expands and covers the whole reel that it appears causing a re-spin where that reel stays in place while the others are re-spun. This continues until there are no more wilds appearing. Apart from the base game win, there are no other bonus options in this simple yet exciting slots game.
Play Now