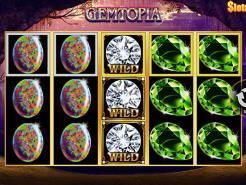 The shining white diamond is the wild and it appears on reels 2, 3 and 4 where it expands and substitutes for other symbols in the game. There is a free spins diamond that when appearing in numbers of three or more triggers the free spins bonus game. Players are awarded 15 free spins during which all winning are doubled. During the free spins an extra bonus symbol is added and if three of these bonus gems appear the player receives an extra 3 free spins in addition to choosing one of them which will reveal a multiplying payout of up to 1000x the coin bet placed. This game is full of sparkling jewels that add to the excitement and the many winning opportunities including the random progressive jackpots.
Play Now