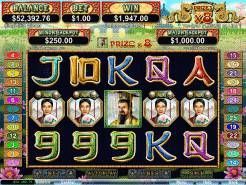 Look out for the Lucky 8 Winning Influences

In this game the lucky 8 symbol is very important as is the emperor. The emperor is wild, and he substitutes for other symbols in the game and in this way completes winning payouts. Five of the emperors on the screen award the player 8x the coin bet placed. The lucky8 symbol is the scatter and this awards players free spins in addition to multiplying payouts. Five of the lucky 8 symbols award the player 88x the coin bet placed. Free spins can be triggered again, and the player can win either of the progressive jackpots during the free spins.
Play Now