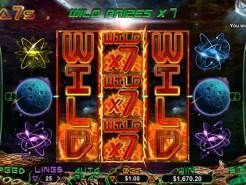 Play Now
Nova7s takes players far into space where they meet exploding planets and plenty of bonus opportunities. The screen is filled with stars, moons, planets and plenty of Novas which are the important symbols to look out for. There are five reels and twenty five paylines in this game where players can place bets of $0.25 per coin per line. There is an auto play option for players that want to preset the number of spins that the game runs for by continuous betting, at any time the player can halt the auto play and revert to manually hitting the spin button.

The red nova 7 is the wild and when appearing on its own it can substitute for other symbols and create winning payouts. The wild may solar flare rewarding the player with some really great generous options. If the red 7 appears on reel 3, it can turn into a random 7x multiplier after flaring, Or he can become a supernova in which the entire third reel is covered in wild multipliers of 7x. The hypernova can also be triggered at random giving the player full coverage on reel 1 and 3. The blue nova is the scatter and this awards players some generous multiplying payouts when three or more appear on the screen. Three award the player 2x the coin bet placed, four awards the player 7x the coin bet placed and five awards the player 77x the coin bet placed. Three and more of the scatters also triggers the fun and rewarding bonus games. Players with a single nova 7 are awarded 7 free spins with an extra wild appearing on reels 2, 3 and 4. With a supernova the player benefits from all winnings being multiplier 7x. The hypernova awards the player expanded symbols on each reel and re-spins and the hypernova extreme rewards the player with an expanded red 7 on reel 3 for the duration of the free spins. This game does take some getting used to, so it is important to try out the game in the fun mode before placing real money bets and this definitely gives the player a chance to get to know the game.
Play Now