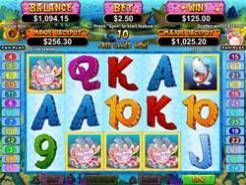 Play Now
Some may call it all beauty where as others call in strange and odd but there is no denying that under the sea there are plenty of interesting creatures and objects to be found. The Ocean Oddities slots game takes players under the sea where they meet the grumpy lobster., king Cod, pearls, pilot fish, Rex the Shark and many other interesting creatures. This game has five reels and twenty five paylines. Players can try out the game in fun mode before placing real money bets of up to $25 per spin. There is an auto play option for players that like to preset the number of spins the game runs for consecutively and there is a major and a minor random progressive jackpot that can be won at any time when playing the real money version of the game. Both the jackpots increase in value with every real money bet that is placed.

In this game, Rex the fish is wild and he appears on reels 2, 3, 4 and 5 where he can substitute for other symbols and complete winning payouts in this way. The pear is the scatter symbol awarding players up to 50x the coin bet placed when five appear on an active payline. Four award the player 10x and three award the player 2x. Three and more of the pearl symbols on the screen trigger 10 free spins during which all winnings are doubled and when Rex appears during free spins he can also double winnings. The free spins can be triggered again giving players more winning opportunities in a game that is odd but easy to play under the ocean.
Play Now