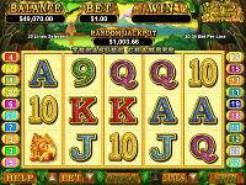 Play Now
Treasure Chamber slots takes players deep into hidden chambers where the handsome adventurer is looking for hidden treasures and other exciting artifacts that may have been left behind. This slots game has five reels and twenty paylines and includes a random progressive jackpot. The random progressive jackpot can be won at any time when playing the real money version of the game, giving players more incentives to play and enjoy themselves in this adventurous slots game. Players can place up to $100 in real money bets when playing this game making use of a variety of different coin sizes.

Helping to Find the Hidden Treasures