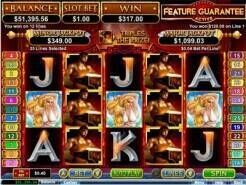 Play Now
The Vulcan is a mythical character that lives on the top of a mountain and he only comes down to hunt. No one wants to meet the Vulcan because they fear what their destiny would be if they met him. This five reel twenty five payline slots game touches on the fears and excitement of the Vulcan and his mysterious world. The game includes two random progressive jackpots that can be won at any time when playing the real money version of the game and there is also an auto play option for players that want to preset the number of spins the game runs for consecutively. The player can place up to $50 per spin and choose from a variety of coin sizes.

In this game the Vulcan is wild and he appears on reels 2 and 4 only where he can substitute for other symbols and in this way help to complete winning payouts. When the Vulcan is used to complete a winning payout, the winnings for that line are triples. The volcano that is bubbling but not erupting is the scatter symbol and this awards players multiplying payouts of up to 125x when five appear on the screen. Four award the player 20x and three award the player 2x. Three and more of the volcanoes on screen award the player 15 free spins during which all winnings are doubled and the player may be lucky enough to trigger the free spins again and also win one of the random progressive jackpots.
Play Now