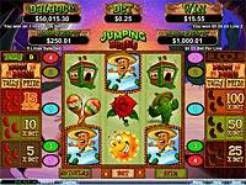 Play Now
Jumping Beans are all over the place in this colorful Mexican game that sees Mr and Mrs Bean leading the way as they spin around the reels. Players can try out this three reel five payline slots game for fun before placing real money bets. There are also two random progressive jackpots in this game that can be won at any time when playing the real money version of the game. When ready players can place up to $25 in real money bets in this colorful and musical slots game.

Both the minor and the major jackpots can be won at any time when playing this game and there is also a wild symbol in the shape of Mr Bean. When he appears he can substitute for any of the other symbols in the game apart from Mrs Bean and at the same time, doubles the winnings for that game. On his own Mr Bean is a high scoring symbol awarding players up to 1000 coins when three appear on an active payline, two award the player 20 coins and one awards the player 2 coins. Mrs Bean is the scatter and triggers 10 free spins when three and more appear on the screen. During the free spins players can collect beans that will show on the table at the side of the reels and at the end of the free spins, the player is awarded a multiplying payout based on the number of beans he has collected. One more feature is the auto nudge that occurs when either Mr or Mrs Bean or both appear on the edge of a reel, the auto nudge is activated and the player may benefit from an extra payout. Of course both the random progressive jackpots can be won at any time when playing the game adding to the exciting and rewarding fun that players benefit from.
Play Now